When we woke up this morning skies were clear. As I started to raise the anchor a heavy fog bank rolled in, visibility was almost 0 so, we had to wait until it the sun burned it off around 10 AM. We raised the anchor and headed east, winds were very light and there was just a light ripple on the water. There were lots of dolphins out and several groups came to the boat to play in the wake as we cruised along. When we got to the  eastern end of Dauphin Island we entered the narrow channel and arrived at the marina at 4:45 pm. we had dinner at Barnacle Bill's a seafood restaurant on the marina site the food there is good.
To see our position click on the link
http://fms.ws/BYXSh/30.26390N/88.11356W 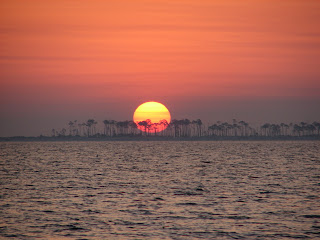 Sunrise over Cat Is.  before the fog closed in. 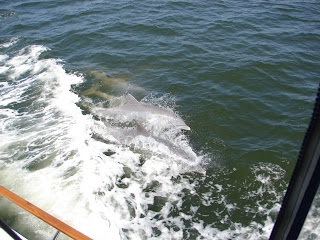 A pod of 4 dolphin in our wake 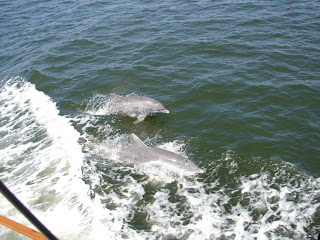 Two more, maybe mother and baby came by later. It is interesting, they hear the boat vibrations and they come swimming straight to the boat to follow in the wake or bow wave, often jumping and diving as you see above.
Posted by stevens at 7:25 PM