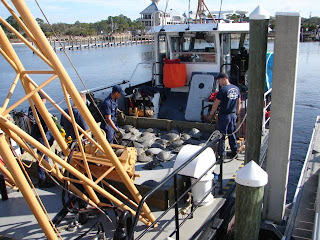 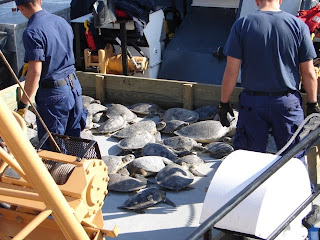 An interesting experimental boat at the Marina 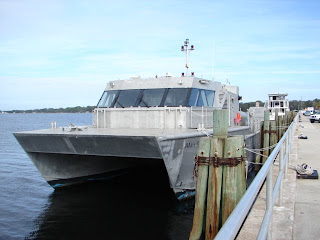 A one of a kind four headed palm tree at the St Andrews Park near the marina
This morning sea turtles were being loaded on a Coast Guard boat to be released in the Gulf. About 2000 of them had been picked up in the bays and beaches nearby when they became disoriented during the cold weather last week, about 500 of those died, no word if those made it to the Sauce Piquante pot
The boat batteries have been running down a bit lately so I bought two new ones. These are size 8D and weigh about 150 lbs each so I had an installer with a couple of helpers put them in. They also checked the electrical system which they found OK
This morning fellow trawler owner and internet friend Rich Gano dropped by and stayed during the battery installation, he offered to bring us to the stores if we needed anything but we are still stocked up from Gulf Shores. This evening Rich and his wife Mary picked us up and brought us out for a great dinner at a local restaurant, Thanks Rich and Mary!
Location: St. Andrews Marina Panama City
Posted by stevens at 9:07 PM