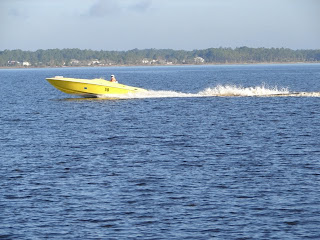 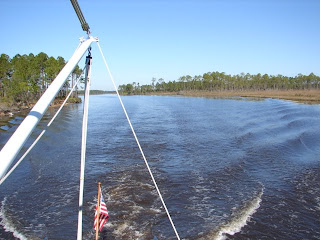 The Blue roofed building is the office of the Port St. Joe Marina 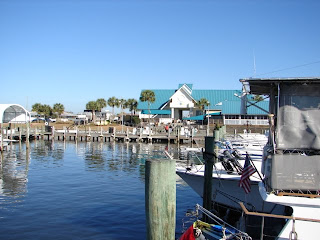 We left the St Andrews marina at 7:20 AM It was cool with light breeze and no fog.
As we were cruising by Panama City we saw our friends the Gills on the Isle of Skye, the boat that we traveled with from Houma to Rabbit Island. They were heading East also but stopping at Port St Joe Marina before Appalachicola. It is looking like it may be a while before the weather is good for our crossing to Tarpon Springs so we decided to spend a couple of days there also.
Along the way we saw one of the Mercury Engines test boats in the bay we have seen these running around on the bay before, putting hours on either inboard or outboard Mercury engines as part of the design process. Seems like it would be fun but for the drivers in their crash helmets driving all day it must be just another job.
We arrived at the St. Joe Marina about 2PM they are on Eastern time so we lost an hour it was actually 3PM we fueled up the boat then moved to our slip between two other Louisiana boats one from New Orleans the other from Shreveport. Port of St Joe is a nice little town originally the "company town" of the St, Joe paper company but now tourism is important. The Marina is very near the town with stores and good restaurants a short walk away. It is a very nice stop reached by the Gulf County Canal which runs from St. Joseph's Bay to the ICW, about 8 miles. We had dinner at a good Mexican restaurant we had eaten at when we were here in 2007. After dinner we met up with a group of boaters having drinks and opening oysters on the dock. the oysters were very good.
Looks like it will be several days before conditions are good for the gulf crossing so we'll try to make the best of it.
To see our location at 11 AM click this link
http://maps.google.com/maps?f=q&hl=en&geocode=&q=29.98996,-85.37046&ll=29.98996,-85.37046&ie=UTF8&z=12&om=1
To see our location at port St Joe marina check this link
http://maps.google.com/maps?f=q&hl=en&geocode=&q=29.81453,-85.30998&ll=29.81453,-85.30998&ie=UTF8&z=12&om=1%20http://maps.google.com/maps?f=q&hl=en&geocode=&q=29.81453,-85.30998&ll=29.81453,-85.30998&ie=UTF8&z=12&om=1
Posted by stevens at 6:55 PM