It was to dreary for pictures today so I'll add a couple from yesterday's trip.
This huge Navy Catamaran arriving Panama City from the West. 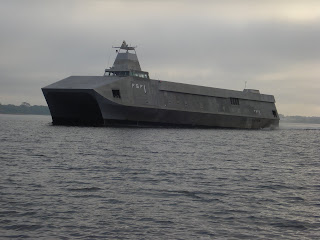 The paper mill just East of Pamama City, unfortunately it can be smelled for miles. 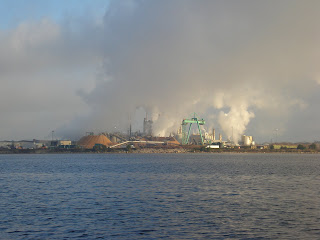 Today was a windy, cloudy, and cold day. I walked into town to Radio Shack and Ace hardware to pick up some parts I needed to finish the cable TV inlet and install a towel rod in the aft bathroom.
At 4PM the marina held a free shrimp boil, including oysters on the half shell, for the boaters staying here. The shrimp were very good, They were boiled with corn on the cob and sausage, soft drinks and beer were included, about 40 boaters showed up several brought appetizers and desserts. Lots of talk about boats, where people have been, and where they are going next.
Same location as yesterday
Posted by stevens at 7:06 PM