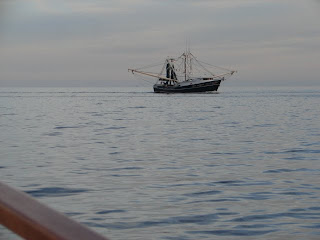 Slow internet connection today so will add some pictures later. (done 01-14-2010)
We had a nice calm night anchored at Rabbit Island and got up to a cold morning with ice on the decks again. When I went to raise the anchor I found it was snagged on some metal on the bottom. Probably a pipe from the abandoned structure on the Island. Tried to get it loose but it wouldn't budge. I was about to cut the chain with a hack saw when I tried a techinque Charles Culotta gave me years ago. I dropped a chain loop on a rope over the anchor stock and drove foreward over the anchor and it pulled it off of the snag. That saved the (brand new anchor) and a bunch of chain and time, thanks Charles!
The waterway was quite busy with tows and shrimp boats. The rest of the day was very nice with light winds, still cold all day though. We arrived to the West end of Dauphin Island, AL at 6 PM where we anchored in 11 feet of water, and called it a day. No abandoned structures nearby this time.
Anchored at 30'23'609
88'29'42