A tow on the ICW 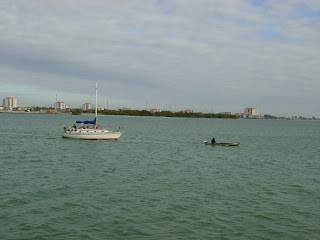 Sarasota skyline With Barnum and Bailey circus in foreground 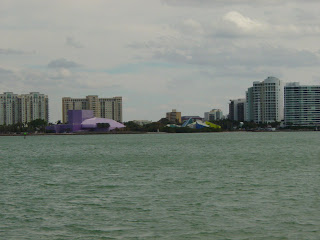 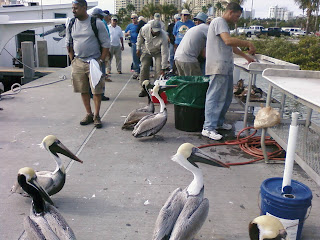 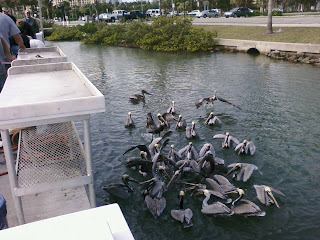 We left the dock at the Sved's condo at 8:45 The weather was a bit breezy but warmed up during the day. On the ICW we saw a tiny boat towing a sailboat with a broken mast and i guess a broken engine they were moving slowly into the wind I am not sure where they were going but there were no places to stop for a while.
We arrived Sarasota Bay about noon it was choopy as the wind had picked up when we go close to the city I called Marina Jack on the radio for the number of our slip and to tell them we needed a holding tank pumpout. The marinas have a vacuum system which is connected to the boat and vacuums out the sewage holding tank, 45 gallons on our boat, it is one of the unpleasant jobs kind of messy and sometimes they malfunction. I had a smelly spraydown a couple of years ago when one squirted me, luckily a shower was close by. No problems today though, once we were pumped put we went to our slip and got secured and the electric cords connected. Marina Jack is a large and very nice marina it is very close to downtown Sarasota which is convenient for boaters.
A charter fishing boat was comming in so I walked over to see what they had caught. It was a "head boat" a big boat with maybe 30 fishermen. They had caught lots of fish but they were very small. They were being cleaned by the deckhands and the scraps were thrown to a flock of hungry pelicans who squabbled over every carcass and scrap.
Dinner at the marina Restaurant
To view our location in Sarasota click on this link
http://maps.google.com/maps?f=q&hl=en&geocode=&q=27.33411,-82.54728&ll=27.33411,-82.54728&ie=UTF8&z=12&om=1